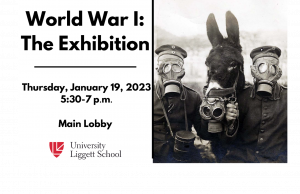 A semester of independent research on World War I will come to life on Thursday, January 19, when students in Liggett’s 11th- and 12th-grade World War I class will host a public exhibition to demonstrate their understanding of the war.

The student-curated World War I exhibition, which runs from 5:30-7 p.m. in the school’s main lobby and auditorium, will feature exhibits that take an in-depth look at the Armenian genocide, food shortages during the war, submarines, the birth of plastic surgery, and espionage during the war.

Adam Hellebuyck, Upper School history, and social studies teacher and dean of curriculum and assessment, said the process of doing research followed by a public demonstration of knowledge is a genuine way to work in any academic discipline.

“Students spent the semester doing in-depth academic research, and the next step is translating that knowledge,” he said. “In other words, how do historians communicate their findings from research? In this case, the students are presenting to a larger community through a museum exhibition.”

“ The guests who will come through here during the exhibition are the ones who are grading the students in that sense and giving them the authentic feedback to become better historians,” Hellebuyck added.

Students will act as docents and discuss their exhibits and research. The event is free and open to the public.