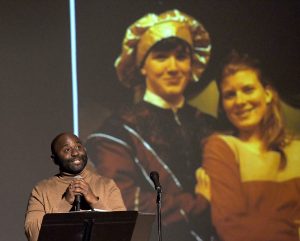 University Liggett School kicked off the Larry Lees ‘97 Memorial Sound Fund fundraising effort with a November 26 tribute concert to the alum who passed away in March 2022 at the age of 42.

The Larry Lees ‘97 Memorial Sound Fund was established in memory of Lees to provide ongoing support for upgrades to the school’s theater sound system and future technology needs in the ULS auditorium. While a student at ULS, Lees advocated for using wireless microphones for performances; thanks to his leadership and encouragement, the school purchased its first set of five wireless mics for use on stage in the late ‘90s — some of which are still in use at the school today.

More than 100 friends, family, and alumni attended the two-hour concert, which paid tribute to Lees and his years as an active and influential member of the theater and performing arts community at ULS. A company of more than a dozen performers and musicians — led by Broadway performers J. Oconer Navarro ‘00 and Leonard Sullivan ‘97 and musician Paul Rossen ‘00 — performed songs and scenes from the productions that Lees was in as a student. More than a dozen classmates and ULS administrators, who were unable to attend, shared their memories and tributes to Lees via video.

Lees attended ULS from eighth through 12th grade and was instrumental in changing how theater was presented at the school. He was the first student to student-direct a show, and he encouraged his classmates to take leadership roles on subsequent productions. He convinced classmate Leonard Sullivan, a well-known dancer in the area, to become the first student to choreograph a show.

By the time of his graduation, the theater department had transformed from primarily adult-led productions to student-led productions — with students taking the lead in every area of a show’s creation, from lighting and sound to costumes and makeup to vocal coaching and choreography.

“All of our shows since the late 90s have had significant student-leadership, and that was due to Larry and his leadership, his drive, and his vision,” said Dr. Phill Moss, University Liggett School creative and performing arts department chair. “You can look on the wall in the auditorium and see the names of all the shows we’ve done since then and reflect on the leadership those students provided. This was the group that started that.”

Contributions to the Larry Lees ‘97 Memorial Sound Fund may be made here.